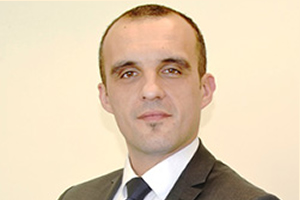 Slaviša Mladenović was appointed as Language Commissioner as of 19th of December, 2012. Mr.Mladenović holds a BSc. degree from the Rochester Institute of Technology with a major in Economics &Statistics and Management, and a minor in Legal Studies. Currently, he is pursuing the MBA degree in the field of General Management at the University of Sheffield.

Prior to being appointed as a Language Commissioner, Mr.Mladenović has worked for the OSCE Mission in Kosovo in the field of analysis, reporting, and media.

Except for his educational and work experience, he has also attended training in the field of Public Administration, European Integration, and Negotiations in prestigious institutions such as Sciences Po, in France, and University of Sheffield in England.

Apart from his mother tongue (Serbian) he is also fluent in Albanian and English.

Mandate of Office of the Language Commissioner