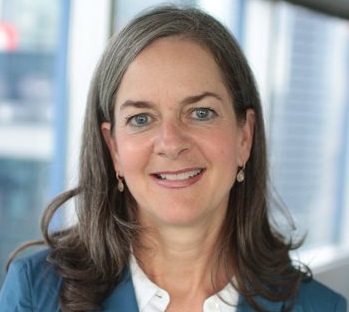 A lawyer and proud Franco-Ontarian, Kelly Burke has been a passionate advocate for the protection of French language rights in Ontario throughout her career.

Ms. Burke has several years’ experience in the Ontario Public Service. She served in senior executive roles at the Ministry of the Attorney General, the Democratic Renewal Secretariat and the Ministry of Government and Consumer Services before being appointed as Assistant Deputy Minister (ADM) of Francophone Affairs in 2014. During her mandate, she was also asked to serve as Interim Deputy Minister of Francophone Affairs.

At the Ministry of Francophone Affairs, Ms. Burke played a lead role in securing Ontario’s membership in the Organisation internationale de la Francophonie (OIF), strengthening Ontario's profile among French-speaking countries and regions around the world. This achievement was the culmination point of a series of events marking the 400th anniversary of French presence in Ontario that were carried out under Ms. Burke’s leadership. She also served as head of Ontario’s delegation at the World Forum of Francophone Women in Bucharest, jointly organized by Romania and the OIF.

Ms. Burke is committed to excellence in public service delivery in Canada’s two official languages and is recognized for her work on transformational and renewal initiatives in francophone affairs, electoral reform, legal services, and continuing legal professional development.  She has also shown a strong commitment to improving access to justice and education in French. In 2019, she served as ADM at the Ministry of Colleges and Universities.

In 1994, Ms. Burke obtained her Bachelor of Laws degree from the University of Ottawa (French Common Law Program) and a Master of Laws degree in Labour and Employment law from Osgoode Hall, York University in 2003. She was called to the Ontario bar in 1996. She holds undergraduate degrees in Arts and Education from Queen’s University, and began her career as a French immersion teacher in the Ontario cities of Cornwall, Sarnia and Toronto.

The French presence in Ontario dates back nearly 400 years to the establishment of the Mission of Sainte-Marie-Among-the-Hurons (Simcoe County) in 1639. Today, after four centuries, Ontario’s francophone community numbers 622,415, i.e. 4.7% of the province's total population. It represents the largest francophone community in Canada outside of Quebec.

In Ontario, the French Language Services Act confers upon members of the public the right to receive services in French from any head or central office of a government agency or institution of the Legislature and from any other office of such agency or institution that is located in or serves  designated areas. Every government ministry and agency in these areas must offer French language services to their clientele whether their offices are located in or serve a designated area.

The Act does not include municipalities in its government agency definition. However, municipalities are subjected to the Act in some instances, such as when they are acting as a third party to deliver services on behalf of government.