Ombudsman of the Basque Country 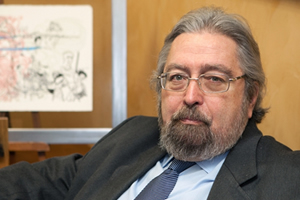 Graduated in Law (LLB with Honours) by the University of Deusto, Bilbao (1980), he holds in addition a Master’s in Law (LLM) by King's College, University of London (1982). Legal officer at the Department of Public Administration and Justice, Basque Government (1983-85), he joined later the Council of Europe, working as a Legal Officer in the European Court of Human Rights (1988-1992). After two years serving as Lawyer for the Constitutional Court of Spain (1992-94), he returns later to the Council of Europe, being appointed, first, as Principal Administrator - Human Rights and Minority Rights- in the Committee of Ministers (1994-96), and subsequently, amongst other positions, Director of the Office of the European Commissioner for Human Rights (2004-2007) and Director of the Congress of Local and Regional Authorities of Europe (2013-2015). He has lectured at the Universities of Northumbria (UK), Deusto and Navarra (Spain), as well as at the International Institute of Human Rights of Strasbourg (France). He has widely published on Human Rights Law, European lntegration, and lnternational Criminal Law, having a particular expertise in Linguistic Rights. In June 2015, the Basque Parliament elected him as Ararteko/Ombudsman of the Basque Country, where he currently performs his mandate. One of his main publications about Linguistic Rights is, namely: “The European Convention on Human Rights and minority languages”, en Minority Language Protection in Europe: into a new decade, Council of Europe, Strasbourg, 2010, pp. 13-26.

Ararteko – Basque Ombudsman is the Basque Parliament’s High Commissioner for Human Rights. Established by the Basque Parliament in 1985, is an autonomous body working independently from any political powers. Ararteko must be impartial and independent and his primary function is to safeguard citizens of the abuses of authority, power and negligent action of the Basque Public Administrations.  We also aim to increase the awareness and sensibility about Human Rights Culture.

The powers of the Ararteko include:

In order to carry out its mission, the Ararteko may, among others:

Undertake inspection visits to centres and facilities providing public services to citizens and ask for a hearing with any civil servant or public employee to participate in a research, conduct all the research it deems convenient or find the proper solutions in the defence of the citizen’s legitimate interests.

Ararteko is commonly in contact with different stakeholders, community associations and organisations and participates in several local and international events and forums to enhance Basque administration public policy and action, improve the quality of the public service provided, the rights ensured, and combat the inequality and discrimination.

Ararteko mission also include the defense of language rights that derive from the co-official status of the Basque and Spanish languages.

The Basque language (Euskera or Euskara) is spoken in adjoining territories located on both sides of the western end of the Pyrenees, in Spain and France. In Spain, the language is spoken in the Basque Autonomous Community, comprising the provinces of Biscay, Gipuzkoa and Alava, and in Navarre. In France, it is spoken in the former provinces of Labourd, Lower Navarre and Soule, in the Pyrénnées-Atlantiques Department.

The Basque language experienced a gradual territorial contraction throughout the last nine centuries, and very severe deterioration of its sociolinguistic status for much of the 20th century. After Franco’s dictatorship, this reductive trend was gradually reversed against the backdrop of growing national identity and its connection with civil liberties and democracy. Unfortunately, Basque is not expanding equally throughout the Basque-speaking territories. While its growth is fundamentally concentrated among the residents of the Basque Autonomous Community, knowledge of the language is growing moderately (in Navarre), and the number of speakers is on the decline in the French Basque region.