The Office of An Coimisinéir Teanga 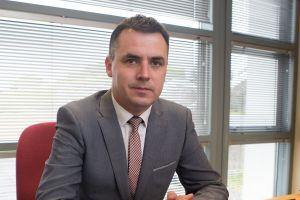 Rónán Ó Domhnaill was appointed as Language Commissioner on 12 March 2014. He was appointed by the President of Ireland following his nomination by the Government. Both houses of parliament, (Dáil Éireann and Seanad Éireann), accepted that nomination unanimously.

Rónán has spent sixteen years as a journalist with the national broadcaster in Ireland, RTÉ. He spent eight years as a journalist with Nuacht RTÉ/TG4 before being appointed to the Political Unit of RTÉ. The following year, 2006, he was appointed as Political Correspondent with Nuacht RTÉ/TG4. This role placed much emphasis on reporting and analysing political stories relating to language rights and legislation regarding the Irish language. Rónán also presented political programmes such as The Week in Politics and Leaders Questions.

The stories he has covered include the publication of the Official Languages Act, as well as the Comprehensive Linguistic Study of the Use of Irish in the Gaeltacht and The 20 Year Strategy for The Irish Language 2010-2030.

About the Member’s Office

The Office of An Coimisinéir Teanga was established in 2004, under The Official Languages Act 2003, to monitor the compliance of public bodies with the provisions of that Act. The main objective of the Act is to ensure better availability and a higher standard of public services through the Irish language. The Office enquires into complaints from the public and initiates investigations where it is alleged that public bodies may have failed to comply with the Official Languages Act or other enactments relating to the status or use of Irish.

A written report on every investigation with findings and recommendations is sent to the Minister for Arts, Heritage, Regional, Rural and Gaeltacht Affairs, to the public body and to the complainant, as appropriate. Any person affected by the findings and recommendations of the investigation may appeal to the High Court on a point of law within four weeks.

Further details can be found on: www.coimisineir.ie

Ireland has two official languages ‒ Irish and English. The Irish Constitution provides that the Irish language, as the national language, is the first official language of the country. The English language is recognised as a second official language. In practice, however, it often happened that no effective provision was made to provide services in Irish as well as providing services in English. People who wished to conduct their business in Irish with the State often felt that they had no option except to use English in order to conduct their business properly. The aim of the Official Languages Act 2003 was to improve the quantity and quality of services through Irish from public bodies.

Irish, the indigenous language of Ireland, was spoken by the majority of the population down to the middle of the 19th century. Currently, it is spoken as a community language in “Gaeltacht” areas, mainly along the west coast of Ireland. In 2007, a linguistic study revealed that Irish was the principal community and home language in 24 of the 154 electoral divisions in the Gaeltacht.

The Annual Reports of the Office of An Coimisinéir Teanga which provide a detailed account of the work of the Office since its establishment in 2004 are available on its website at www.coimisineir.ie/Foilseachain