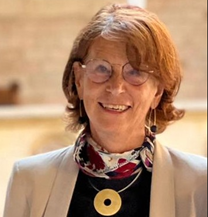 Esther Giménez-Salinas i Colomer holds a PhD in Law and a diploma in Applied Psychology by the University of Barcelona. She was head of the Legal Defence Service for Minors in the Department of Justice of the Catalan Government from 1981 to 1983. From 1983 to 1993 she was Director of the Centre for Legal Studies and Specialised Training of the Catalan Government. She was also Deputy Director of the Institute of Criminology of the University of Barcelona, and was appointed member of the Council of Europe’s Scientific Committee on Criminal Policy, in Strasbourg (1993-1997).

In 1995 she was appointed Director of Institutional Relations of the Department of Justice of the Catalan Government. A year later she was appointed member of the Spanish General Council of the Judiciary in Madrid (1996-2001).

Since 1996 she has held the Chair of Criminal Law and Criminology at the ESADE Law School of the Ramon Llull University, where she was President from 2002 to 2012. At the end of her term, she was a visiting professor at Fordham University, New York (2012/2013), and in 2015 she taught at a postgraduate course on criminal justice system and corruption at the Autonomous University of Mexico (UNAM). In 2017 she was awarded the Nelson Mandela Extraordinary Chair of Restorative Justice by the National Human Rights Commission of Mexico.

As a result of her experience in the university sector, between 2012 and 2020 she was a non-executive director of Santander Bank, and in 2021 she was appointed the same position in Mexico.

From 2006 to 2012 she was president of the Inter-University Council of Catalonia’s Women and Science Commission. Between 2011 and 2015 she was also a member of the Board of the European University Association (EUA).

She holds an advanced research accreditation from the Catalan University Quality Assurance Agency (AQU Catalunya) and has completed a twenty-four-year period of research work. She has authored numerous scientific publications in her areas of specialisation: criminal law, juvenile justice, penitentiary systems, criminology, restorative justice, victimology, higher education and gender. She has visited many juvenile facilities and prisons around the world as a specialist. In 2018, she stayed at the Islas Marías prison in Mexico, where she gave a course on restorative justice for inmates and staff.

From 2016 to 2022 she has directed the Pere Tarrés Chair of Social and Restorative Justice at the Ramon Llull University, through which she has been able to investigate the social reality.

Since 15 July 2022 she holds the position of síndica de greuges of Catalonia (Catalan ombudswoman).

ABOUT THE MEMBER'S OFFICE

The Catalan Ombudsman’s role is to handle the complaints concerning the public administration. The Ombudsman oversees the proper functioning of the Catalan Government (Generalitat) and local administrations, such as local councils, provincial governments or county councils. It also has the mandate to supervise private companies that provide services of general interest, such as electricity, telephony, water, gas, postal services, etc.

The Catalan Ombudsman, whose incumbent is elected by a qualified majority of the Catalan Parliament, is politically independent and acts with objectivity, freedom of criteria and independence. It is a recent institution as we know it today, but its roots go back to medieval times.

Title I of the Act establishes the law's dual purpose: to regulate the institution and to designate the Catalan Ombudsman as a mechanism for the prevention of torture and cruel, inhuman or degrading treatment, as stipulated in the Optional Protocol in the United Nations Convention.

Click here for further information on the Catalan Ombudsman’s Office.

KEY INFORMATION ON THE LANGUAGE SITUATION IN THIS COUNTRY/REGION

The most common issues handled by the Catalan Ombudsman regarding language rights are: the public administration’s failure of using citizens’ preferred language in their relations with the administration; very little use of Catalan in courts of justice; requirement to speak in Spanish by the National Police or Civil Guard when patrolling in Catalonia; lack of language availability on public websites and traffic signs, and lack of teachers with linguistic training in Aranese. The language used in schools has been a matter of political controversy, rather than a language rights defence issue.

The Statute of Autonomy of Catalonia